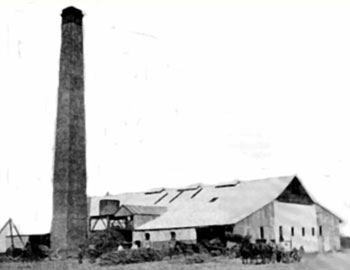 In 1873, William Henry Hyne and George Francis (Frank) Bridgman, owners of Lake Elphinstone and Fort Cooper stations purchased five small blocks with a total area of 12.14 ha on the eastern side of Nebo Road.  Additional land brought the total area to 60.7 hectares.

Here they developed a small plantation, Balmoral, and its mill, which stood on the site of the Sugar Research Institute and began crushing in October 1873.  Cane from neighbouring farms was also crushed. Hyne replaced his Bourbon cane with Black Java, which was a smaller plant with greater sugar content. In the 1874 season this replacement cane yielded almost three tons of sugar per acre, nearly twice the yield of Bourbon.

When Hyne and Bridgman bought the larger Meadowlands Mill to the west of the lagoons in 1878, they transferred operations to that mill, and Balmoral closed. Its machinery was used in the construction of Marian Mill in 1882.

Following the acquisition of Meadowlands, Hyne and his wife Phoebe Margaret (nee Smith), built their home "Balmoral House" on the old plantation. Partially damaged in the 1918 cyclone, the house was rebuilt opposite the water tower and surrounded by Poinciana Trees (Delonix regia).